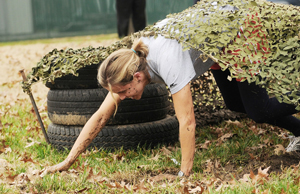 Netting is an excellent way to conceal personnel, equipment, and even entire camps from ground or aerial observation. It can be used in “ghillie suits” to help individuals blend with their environment, or in rolls large enough to disguise anything from Jeeps to grounded aircraft or even tanks. Camo nets come in a variety of colors, from the classic green/brown camo to desert tan or snow white camo. Our military camouflage netting has an additional mesh layer for extra strength.

Physical training and rigorous workouts are a crucial part of military service. Rugged rope cargo netting is used on obstacle courses to create barriers for both climbing over and crawling under. Our rope cargo nets feature Lock-Tuc construction for durable square corners that maintain their shape and meet military training needs. 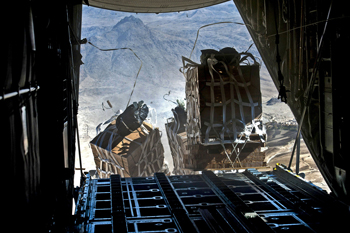 For various reasons, it is impractical to have guard rails around the edges of aircraft carrier decks, except for six-inch-high rails called scuppers. Planes can be securely chained down when not in use, but crew members are at risk. To protect personnel and equipment from being blown over the edge by strong winds on the flight deck, aircraft carriers use safety nets on the sides of the ship (similar to nets used for fall protection on construction sites). Also, malfunctioning or damaged planes that cannot make a normal landing on the flight deck can be safely caught using webbed crash barricades.

Many things our men and women are put up against is not always another human being or even a breathing animal. Many times the great outdoors is what our armed services are put up against. Many times in training a lot of hours are spent on basic outdoor survival skills; because no one likes sleeping with their head in the mud. While we have many different ropes, netting, and custom productsthat may be used in the big bad world. Our friends over at Hikingmastery.com have the perfect way to keep your head out of the mud with the best hammock tents.

Unmanned Aerial Vehicles (UAV), or drones, have many uses; but from a military standpoint, they can potentially be security threats or physical hazards. Unidentified drones could be conducting unauthorized surveillance in classified areas, or could have weapons on board. In January 2015, an unidentified quadcopter crashed on the White House lawn; it turned out to be harmless, but its presence caused justifiable concern. Combating such invaders involves netting. French company Malou Tech has developed an interceptor drone with a net that hangs below it to grab rogue drones. Better yet, the Human-Interactive Robotics Lab at Michigan Tech University has created an interceptor drone that can shoot a tethered net like Spider-Man’s web to capture an intruding drone in flight up to 40 feet away.

Developing and testing drones requires some safety measures for the operators; and once again, netting is the answer. Drones combine speed, sharp blades, and the potential to malfunction. US Netting is an innovator in drone safety nets, offering a range of protective frames and panels to shield pilots, bystanders, and the equipment itself, like the spectator cage we created for a Drone Racing League event at Harvard University. This safety netting can be used for military drone applications as well.

Military air drops have been in use since World War II to get supplies into areas unreachable by land. They have been used to drop everything from propaganda leaflets to Humvees. They can deliver not only weapons and equipment during combat, but also food and medical supplies on humanitarian missions. Whatever the payload, it is most likely secured with webbed cargo nets, as in this video of a supply drop over Afghanistan that clearly shows the nets in action. Military cargo netting can be used not only to drop things but also to lift them out — for example, rescuing personnel on land or in the sea. We offer military cargo lifting nets with a capacity of up to 6,000 pounds, and load-bearing straps in contrasting colors for added visibility.

At US Netting, we are proud to offer our military whatever types of netting are needed to get their many jobs done. We are even more proud to provide military nets that are fabricated right here in America. And we are always willing to design custom solutions. Just call 1-800-331-2973 or e-mail [email protected] to put our team to work for you.

Sources on Military Uses of Netting: