Netting has been used in the aviation industry for a multitude of purposes – some of which became unique to solve problems when nothing else was available. The most typical is cargo netting that is used to secure payloads both in transit to aircraft as well as during flight.

But, there are other uses for cargo netting that are just as common in the aviation industry today. During WWII, for example, cargo netting was adapted to be used to cover areas in cities that were potential targets. In fact, many areas in Los Angeles, California installed cargo netting to protect residential and commercial zones from the view of aircraft that may fly overhead.

And, it worked so well that today the military uses camo netting to cover bunkers, military field depots and aircraft on the ground.

The military even uses camo netting in West Germany to cover open areas where Harrier Jump Jets are exposed to surveillance drones and satellites.

In many areas where camouflage is unnecessary but repairs must be made in open areas, tenting aircraft and helicopters with shade netting is a preferred option. By shading the area where mechanics and maintenance crews work in heat or cold, it keeps the zone at a comfortable temperature. 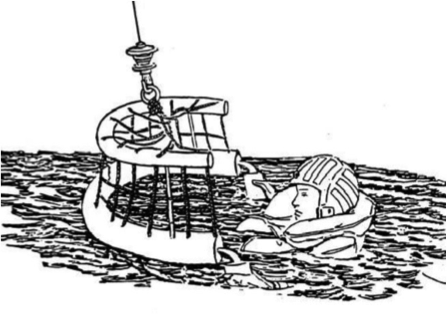 The Navy’s Rescue helicopters use cargo nets in combination with other rescue devices, such as stretchers and seats that can lift people from land or sea when other means of reaching them may be impractical or impossible.

By enclosing a seat with netting, it allows the rescue team to safely lift a person out of the water, even if they are unconscious or injured.

The European Combined Forces working with the U.N. use cargo netting and lifting nets to load, secure and drop humanitarian aid and supplies in areas that are inaccessible by land—- whether in war zones or in areas hit by floods, hurricanes, earthquakes or remote disaster relief. 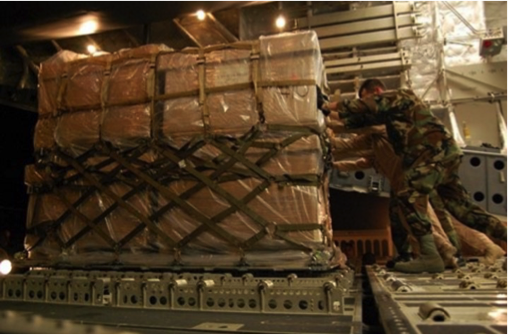 Perhaps, one of the least publicized use of cargo nets is in the bays of government aircraft to transport scientists to both the Arctic and Antarctic Poles.These scientists and researchers of the Polarfield project sit in Kevlar™ cargo net seats during the flight to the polar region.

Obviously, one of the more common uses of cargo netting in commercial airlines is for containment purposes in order to make sure that luggage and cargo loads don’t shift during takeoff, flights and landings.

But, there is another very popular use for netting in the commercial airline industry – one that passengers don’t see but is silently appreciated when their luggage doesn’t get lost, damaged or left behind. 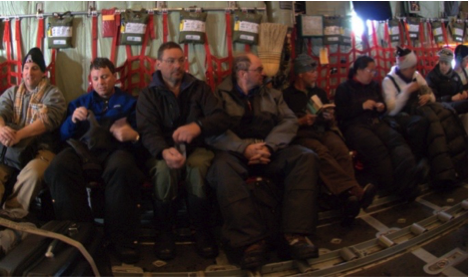 Many airports are now beginning to employ netting for their luggage conveyor belts.The one at the left is a fall protection system for the passengers luggage, ensuring that everything on the belt reaches its destination; it also prevents damage caused by items falling off the belt system.

Reliable Cargo Netting from US Netting

U.S. Netting has the equipment, experience and craftsmanship to be able to custom make any size netting to meet your particular projects specifications.

We use a variety of materials for fabrication which means that you can choose your favorite materials, colors and sizes.

For netting that has to be strong and fire-resistant, we can offer custom made Kevlar™ netting for lifting slings, cargo lifting or cargo containment.

Our company’s customers include military, international government agencies such as EUROCOM, commercial and private aviation enterprises.

We know the specification requirements of each agency overseeing the aviation industry involved – FAA.

We don’t stop at fabricating the netting – we match it with fabricated hardware and at-tachment units so that you know that everything fits in and is ready for installation. 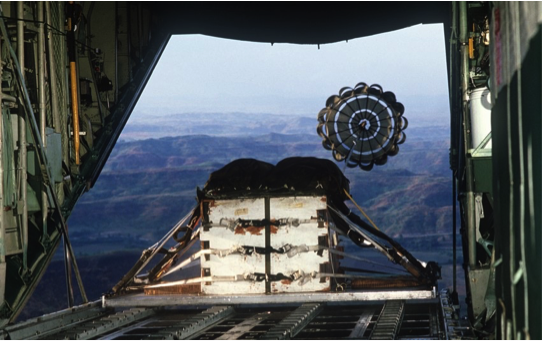 We have the ability to design and meet specs for any aerial delivery system that you require to include quick and easy release options without needing any special equipment or tools when it reaches the ground.

Whether you have one private plane, an entire fleet, are a commercial or government enter-prise, call us at 800-331-2973 for all your aviation netting application needs. For customized designs and options, contact our sales department by email at [email protected] and we will be happy to assist you with your project requirements.