Yes, you read the title correctly. Anyone in construction knows the value of using safety netting in a construction area – even those who think it “might” cost too much because they never really call to find out if there are solutions to fit their budgets. But, why would anyone think of using it just for fun or better, yet, combining the design to achieve both.

There is a reason that OSHA does not approve tarps or painter’s cloth to be used in place of construction safety netting. Even though there appear to be holes poked into the cloth barrier, you can still see that it is capturing air. The billowing allows debris to break loose and tumble from the construction area.

It is unclear from the photo to the right if there is a proper netting installation on the open parts of the building but if there is, it is not wrapped correctly to prevent accidents.

The photo above is the way that debris netting solutions should appear and also shows how construction netting should be installed and even at this distance, it is obvious that the site is wrapped.

The photo above is of a current construction site in Manhattan, N.Y. where a 36-year old woman was killed by a piece of plywood caught by the wind, smashed against her and hurtled her against the side of a building, causing a major injury to her skull.

She was rushed to a nearby hospital and died within 3-hours.

The construction company pointed out that “winds were gusting” and that was enough to cause a piece of plywood to be flung into the street below. As a note, any construction done on a building that is more than six feet high is subject to “gusting” winds, grabbing loose materials and throwing them great distances.

How long do you think your company would be in business if this is what you were facing?

Because the construction company did not have proper OSHA safety regulation netting installed and the material that killed the young real estate agent belonged to them, the likelihood of a major lawsuit looms large on their horizon.

In New York, it is also likely that the contractor in charge will lose his license permanently and be banned from ever owning another construction company again anywhere in the U.S.

Add to that, the potential of the corporation that hired this construction company for the job. If there is evidence to show that the corporation was more concerned about saving pennies than having the job include OSHA approved safety netting solutions, the corporation might also be liable for any injuries or deaths from the improvements.

No two buildings are the same exact dimensions and at US Netting we are aware that you need more than a “guess” on the amount of material that is needed to safely protect the public from debris.

We have spent 32 years devoting our business to custom fabrication and installations of safety netting because we believe that protecting a company from an unnecessary lawsuit is as important as protecting the public from injury and death. Installing approved safety netting features and fall netting for the protection of workers may be more expensive than using a tarp but it is worth every penny when compared to a lawsuit that devastates your financial security for many years to come.

Check out our fall and debris netting in a single combined fabrication to make it easier to protect workers and debris from dive-bombing bystanders below. Personal fall netting is always recommended for areas where a person of any size could fall to an area below. 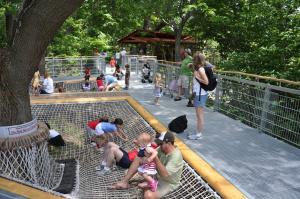 The Morris Arboretum took this to an all new level by utilizing the fall protective netting in a way that children could bounce on it and explore the trees close up. Instead of just enclosing the walkway with safety fencing on both sides, the designers chose to use the space as an additional activity area.